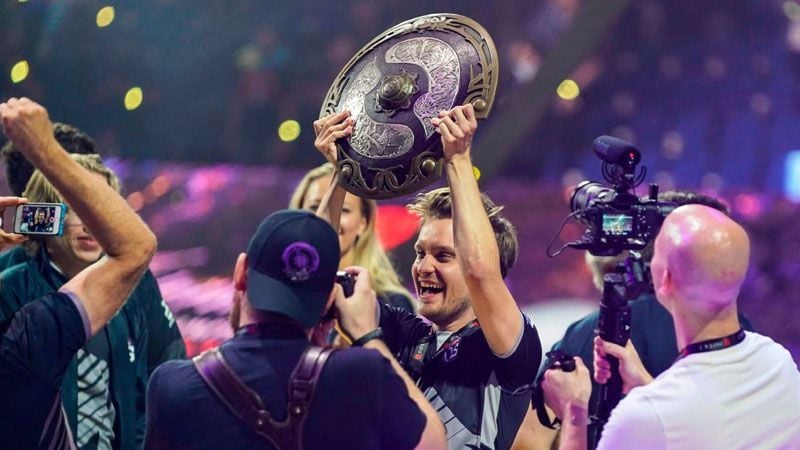 Which countries are acing in Esports? Picture Courtesy: The International

Countries that have produced some of the most illustrious Esports stars and acing in their own countries.

Competitive gaming quickly evolved from a specialized pastime to a thriving entertainment sector in less than two decades. The Esports market was estimated to be worth $3 billion by 2022, reaching a net value of $1 billion in 2020. Millions of people play top Esports games like League of Legends, Fortnite, Dota 2, and CS: GO. To put things in perspective, there are now tens of thousands of professional competitors for CS: GO and much more for other games. The finest Esports players in the world now hail from practically every nation on earth.

Esports are unquestionably as impressive as they seem to be. However, there is still ongoing discussion regarding whether the nation can regularly produce these elite competitors. Today's numbers show that a diverse range of nations produces the highest-paid and probably best quantified Esports players worldwide, according to Esports Earnings.

For instance, the Danish Dota 2 player "N0tail" has amassed around $7 million in prize money. Some of the top ten Esports players are only found in Dota 2, and they come from nations such as Finland, Australia, France, Germany, Jordan, Bulgaria, and Lebanon. Of course, the extreme popularity of Dota 2 players distorts these revenues. Countries like the USA, China, South Korea, and Brazil are prominently included in the top 100 best Esports players by earnings. Here is a brief overview of some countries that have produced some of the most illustrious Esports stars.

It should be no surprise that South Korea has consistently produced many of the top competitive gaming stars as it is often considered to have originated the Esports craze. Korea often generates Esports legends in games like Starcraft, League of Legends, and PUBG.

A significant factor in the success of games like League of Legends is the presence of well-known South Korean Esports players like "Faker." His prize money from Esports competitions totals more than $1.2 million. Other South Korean celebrities like "Bang" and "Wolf" have undoubtedly bolstered the argument that this country is home to the top gamers in the world. Both play League of Legends and earn around $1 million in Esports winnings.

With famous stars like Rogue and Maru earning over a million apiece, Korean players alone have amassed over 20 million in Starcraft 2 winnings. Pio is another well-known PUBG player who has won over a million dollars in the previous two years alone. He is considered to be one of the finest PUBG players. South Korea has funded professional gaming academies to guarantee that it continues to produce the Esports stars of the future. The nation has also televised Esports on public television for over 20 years. South Korea is comfortably in the first place.

The Chinese government initially resisted competitive gaming, but as Esports gained recognition in 2019 and popularity there, it was predicted that China would soon overtake the US as the second-largest Esports market. China has even created an Esports village in Hangzhou to foster the next wave of professional gaming talent. Cities like Shanghai, Wuhan, and Guangzhou swiftly launched their Esports assistance schemes after seeing success. With China's Esports and gaming market being the biggest in the world by several players, there is much room for expansion. According to iResearch, almost 600 million individuals in China play video games on their phones, computers, or gaming consoles.

Player-wise, League of Legends superstar "Uzi" has won over $545,000 in prize money, while Dota 2 player "Somnus" has nearly achieved prize wins of $3 million. Although many of the most decadent League of Legends players are still South Koreans, Chinese stars "JackeyLove" and "Ning" have managed to stay in the public eye. JackeyLove and Ning are two of the top 10 players in earnings as of May 2021, according to Statista. It's interesting to note that China has one of the most diversified Esports ecosystems, with players playing in internationally popular Esports like FreeFire, CrossFire, and Honor of Kings and locally made Esports like those three.

Due in large part to their unquestionable successes in several Esports, the Danish Esports scene has gained supporters all around the world. Denmark has developed unrivaled skills for such a "small" nation throughout the Esports industry. For instance, the CS: GO squad Astralis has consistently won significant competitions up to the 2019 Berlin Major. Danish League of Legends players like Bjergsen, Broxax, Caps, and Wunder have all achieved legendary status. N0tail, a star in Dota 2, as well as his compatriots Cr1t and MiSeRy, have previously been highlighted.

Some of the highest-earning and most well-known Esports celebrities are often from Denmark. Since 2019, the Danish government has also paid attention to the talents living there and has worked to develop the Esports sector.

It goes without saying that the USA would never pass up the possibility of producing some of the top Esports stars in the world. From multi-millionaire professional Fortnite player "Ninja" to "Sneaky" and his fantastic League of Legends accomplishments. The United States has produced some incredible athletes. Everyone knows that Dota 2 produces some of the highest-paid Esports stars, and it's fascinating to see how many US players, like UNIVERSE, ppd, and Fear, have recently moved up the highest-paying list. Then there is Bugha, who won the Fortnite World Cup Solo and set the record for the highest-paid US player in 2019.

Even though the USA seems to have all the most important titles to date, the area isn't necessarily the greatest for an Esports nurturing site. Knowing they would have more powerful opponents to spar with, Evil Geniuses often traveled to Europe for bootcamps. In any case, if there is ever a discussion over which nation has the finest gamers, the United States is at the top of the list.

Swedish Esports has long been a significant force in Europe. Jönköping is the site of the highly significant DreamHack Esports competition, where some of the most famous Esports occurrences have occurred. Since Sweden has fostered Esports since the 1990s, it should be no surprise that many of this country's gamers have made their presence known with devastating impacts worldwide.

Olofmeister, f0rest, and KRiMZ are among the top CS: GO players, and there is plenty of evidence to show that Sweden is significantly punching above its weight when it comes to which nation generates the finest Esports players, from Dota 2 superstars like s4 and ZAi to some of the best. The capacity of Swedish gamers to provide outstanding results across a wide range of games is astounding. It is simple to see why Sweden has swiftly become a powerhouse in Esports, thanks to players like "Armada" and "Toxjqs," who put out incredible performances in games like Super Smash Bros.

Over the years, we have seen the German Esports sector grow stronger and stronger. Germany would have to be included among the nations with the top Esports players if you were just considering career earnings. Thanks partly to the legendary Dota 2 skills of "KuroKy," who has amassed over $5 million in prizes, and the venerable German Esports leagues SK Gaming, mousesports, BiG, and MeetYourMakers, which have earned millions in prize money over the previous 20 years.

There is a tonne of proof that Germany can produce some very amazing competitive gaming stars, such as "FATA" from Dota 2, "NinjaDimi" from SMITE, and "ShoWTimE" from StarCraft II.

Many Esports luminaries and current champions are from Finland. The world's highest-paid Dota 2 players are "JerAx" and "Topson," two-time Dota 2 International Championship winners. Even the president of Finland acknowledged them and invited them to the castle's celebration of Independence Day. Not to be forgotten is another international champion, "MATUMBAMAN," even though he was not invited to any festivities.

The relatively modest Finnish Esports sector has what it takes to rank well nationally. Talents from other well-known Esports games, such as team ENCE in CS: GO and PUBG, have also been a constant. These people stood out in particular as the Finnish crowd cheered them on at the Katowice Major 2019 finals and the subsequent tournaments.

The Philippines deserves to be ranked eighth among the greatest Esports nations due to its biggest fan bases and immense profits. In recent years, the region's burgeoning Esports sector has grown so well-known that it has supplanted the craze for mobile gaming. Filipino players and teams are widely recognized as underdogs, dark horses, or teams with little stakes in traditional Esports games like Dota 2. As a result, they often outperform expectations when the stakes are high. For instance, in the lower bracket round of the International 6 tournament, TNC Predator defeated team OG, forcing the team to withdraw early.

Filipino fans will never forget the day these giants were deposed from their throne, even if team OG is now considered the most reputable Esports team. Despite this, the Philippines' viability as an Esports nation is sometimes ruled out owing to a lack of suitable infrastructure and internet connections. It's almost unique how skilled individuals can still compete with their foreign rivals via practice. Filipino players are starting to take the lead in mobile Esports. Every game, including King of Glory, Wild Rift, and PUBG Mobile, has many Esports teams participating, elevating the nation as one of the most significant emerging marketplaces in the world.

Finding Brazil in our selection of the top Esports talents may surprise many people. Then it occurs to you that the storied teams mibr and FURIA are both Brazilian. Brazilian legends have dominated CS: GO in previous years with legendary squads. Brazilian gamers have shown to be huge fans of this first-person shooter, with players like Coldzera, FalleN, fer, and TACO all displaying excellent proficiency. Gabriel The prize money won by "FalleN" Toledo alone totals more than $1 million.

Brazil can also offer some significant gaming talent for first-person shooters. Brazilian players are always a threat in CSGO, Valorant, and PUBG.

It should be no surprise that Russia made our list of the best competitive gaming countries, given that iconic Russian Esports teams like Virtus continue to provide fierce competition to other international opponents.

Russian Esports players are always worth keeping an eye on, whether it is "Solo" winning big in a Dota 2 event or "flamie" giving a masterclass in CS: GO. Remember that Russia often dominates popular Esports games like World of Tanks, with players like "Inspirer," "LeBwa," "Nuclear," and "Neskwi" proving to be lethal. Russia has specific interests regarding Esports titles, similar to how China grows in terms of Esports.