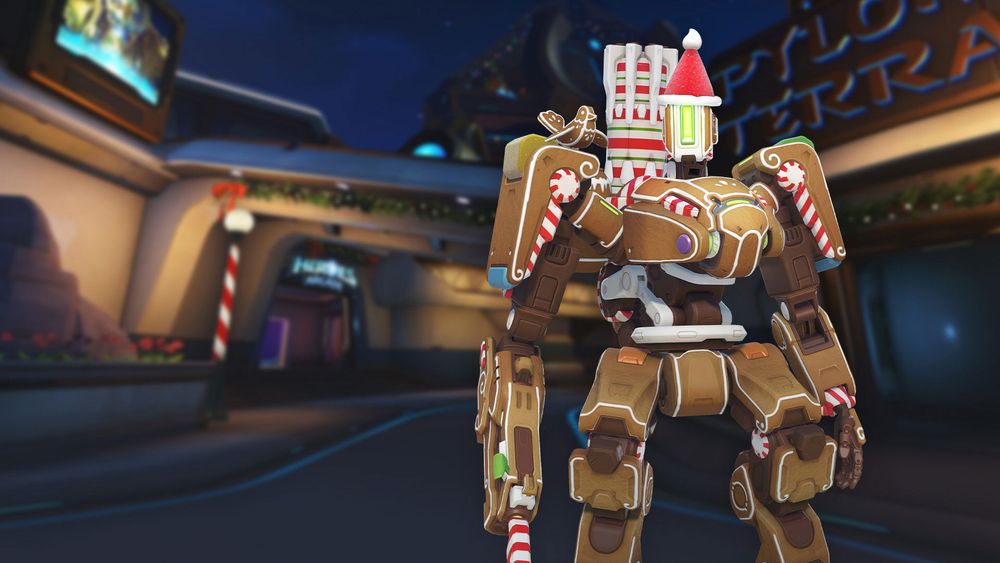 Between now and January 3, you can get the new Legendary Gingerbread Bastion skin from the Shop for just one Overwatch Coin.

Although Overwatch coins are the in-game premium money, players can earn them by completing in-game tasks. Earning 30 Overwatch money after completing four weekly challenges is more than enough to buy Gingerbread Bastion. The offer is up as of right now and lasts until January 3.

Offering A New Bastion Skin For A Dirt-Cheap Price

Bastion receives a frosted exterior, peppermint support, and a gumdrop helmet from gingerbread. Even Ganymede has a tasty boost when it turns into a gingerbread bird. The skin is inspired by the current Winter Wonderland event, which sees the Overwatch 2 cast wearing their merriest attire and taking part in several winter limited-time variants, such as Mei's Snowball Offensive and the five-vs-one Yeti Hunter game. The cost of skin in Overwatch 2 is substantially more than one cent. Prices for skins and other related goods, such as victory poses, cosmetics like sprays, and more, typically range between 1,500 and 2,000 Overwatch coins, or $15 to $20.

Players have expressed dissatisfaction with the pricing of the skins and other cosmetic items in the game's store, particularly given how seldom coins are awarded via normal gameplay. A price of one Overwatch coin basically makes Gingerbread Bastion free, erasing a large portion of the financial barrier to entry with cosmetics that many players have had to cope with since the release of Overwatch 2 in October. One of Overwatch 2's main flaws in its early stages has been the way it approaches revenue. Blizzard is giving players additional opportunities to add skins to their collection for free or, in the most recent instance, almost free.

The new Legendary Gingerbread Bastion skin is available from the Shop for only one Overwatch Coin until January 3. As a reminder, the game's weekly challenges may be used to gain Coins. This skin is excellent! I like how beautiful Ganymede is in this picture. You could almost forget that Bastion is a weapon capable of ruthless devastation with this appearance. Almost. Whether or not you were focused on doing all 11 tasks every seven days, if you've been playing Overwatch 2 consistently, you'll have at least some Overwatch Coins built up from weekly challenges.

Even if you can't save enough Coins to get free access to the premium Battle Pass each season, this skin may be a wonderful addition to your collection for a discounted price. I hope you won't run out of money for anything else you desire. Over the next weeks, there are a few more options to get skins at no cost. While the Winter Wonderland event is still going on, complete certain Arcade tasks to get a Brigitte skin. Starting on December 25, Twitch drops will allow you to unlock a D.Va pose and Legendary skin (assuming you don't already have them).